Matthew Evans in his book, “On Eating Meat”, reveals the realities of intensive commercial food production in Australia. Farming practices in other countries are also referred to.

Whilst many facts are presented in the 24 chapters, Matthew also shares his own journey with food—as a person who enjoys eating, a chef, and farmer. The way he shares his journey encourages the reader to examine his or her own relationship with food (not just meat). 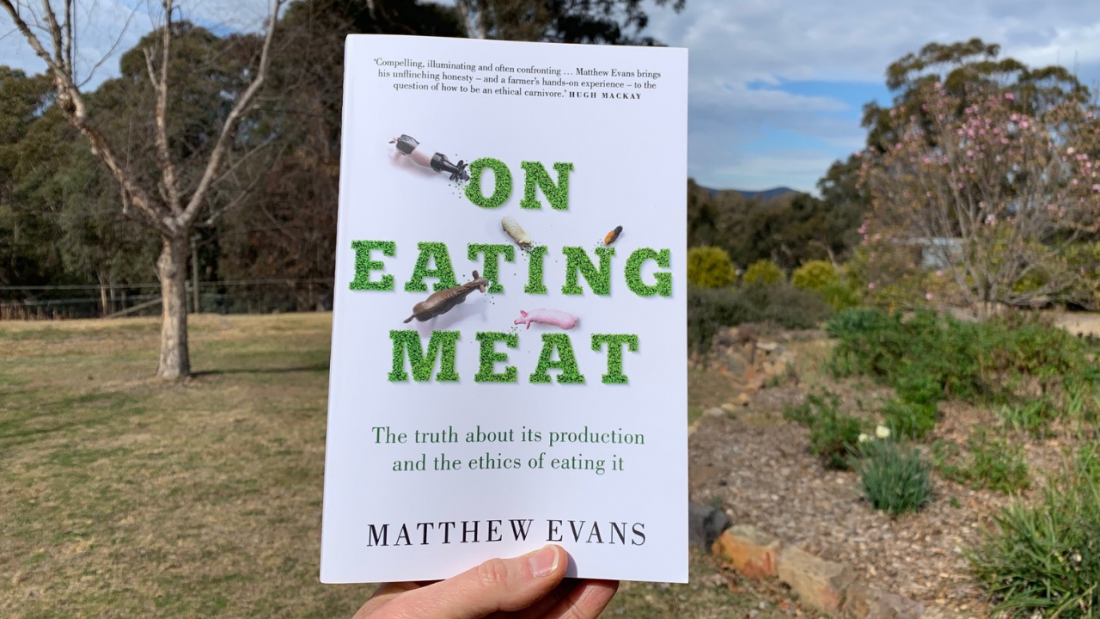 On Eating Meat explores the ethics of food production, based on Matthew’s research for the SBS television series, “For the love of meat”, as well as research that he has undertaken after the completion of this series.

I do not want to share all of the statistics and data from the book, but just a few to put Australia’s meat-eating culture into some sort of perspective.

The average annual consumption of meat from the “2018 Meat & Livestock Australia’s state of the industry report” states that in 2017, Australian’s consumed on average 111.4kg meat, which included

The global average for meat consumption that same year was 34.1kg.

During 2017, Australians on average consumed 300g per day of meat, compared to the global daily average of 93g.”

Matthew’s book suggests that Australian’s are eating too much meat for health, and for environmental and ethical reasons too.

Matthew poses the question whether we need to eat meat for good health. And he answers, “probably no”. Having chosen a vegetarian pattern of eating himself for a major part of his adult life, he knows that you can eat well and be healthy without meat.

I agree that most people do not need to eat meat, and following vegetarian and vegan patterns of eating can actually reduce the risk of common lifestyle diseases. However, the Traditional Meditteranean styles of eating, which includes small amounts of animal foods, also bring health benefits.

Mathew now chooses to eat ethical meat, which is produced like the meat on his own farm in Tasmania, Fat Pig Farm. He describes the life and death of his animals in great detail in “On Eating Meat”. He also shares his experiences of farming in the SBS program, The Gourmet Farmer.

Too much meat can actually pose health problems, and Matthew refers to the potential cancer risk of eating red meat. The International Agency for the International Research on Cancer (IARC) rates red meat as Group 2A, which means that it is probably carcinogenic to humans. There is strong evidence linking red meat intake and colorectal cancer. Processed meats are classified as Group 1, meaning that there is convincing evidence that they cause cancer in humans.

Matthew does not propose the ideal level of meat intake, but throughout the book, suggests that we eat less meat. As mentioned above, this encouragement is given for health and for ethical and environmental reasons as well.

So what is ethical meat? Ethics is explored in great detail in “On Eating Meat”. Matthew provides numerous examples from the beef, dairy, chicken, and pork industries, although he had limited access to the chicken industry and was not given any access to piggeries.

Reading about the treatment of animals is confronting, but it is essential. We have to consider housing, access to outdoors and shade, their comfort, their food and the use of antibiotics. Animals that Australians eat do not grow up and end their lives like the ones on Fat Pig Farm. Not every animal gets to live foraging and expressing their natural instincts, or die on the property that they were raised.

Not every animal gets to live foraging and expressing their natural instincts, or die on the property that they were raised.

Other ethical issues raised by Matthew are numerous, including the culling and killing of wild animals to protect vegetable and grain crops, and the devastation of feral cats on wildlife. Statistics include 200,000 wood ducks being killed to protect rice crops in NSW and each feral cat, of which some estimates place the numbers at 6 million, kills 1000 native animals every year. Statistics such as these make us understand that millions of animals die because of decisions that humans have made.

If we eat food, even if we follow a vegan pattern of eating and buy food that is commercially grown, we are inadvertently killing animals. We can make decisions to buy ethical food and minimise the harm caused to animals.

We can make decisions to buy ethical food and minimise the harm caused to animals.

Chicken eggs and dairy foods raise other ethical issues. Whilst we, as consumers, have lobbied hard to give hens more space to spread their wings we have been silent on the killing of male chicks. In the dairy industry calves and mothers are usually separated within 24 hours of birth. The calves are then fed on milk powder-based feeds, and the fate of male calves varies depending on the dairy.

I came to a similar conclusion as Matthew about these industries. Selecting breeds of chickens that are good egg layers but also suitable for meat would at least mean that the lives of male chicks are not going to waste. These animals could be raised for meat. A similar situation in the dairy industry, by changing the breed of the dairy cow to one that could also be used for meat would decrease the waste of lives, and provide valuable food. This would come at a financial cost the consumer though, as egg and milk prices could rise. Would it be worth it to you?

Would it be worth it to you?

Meat and the Environment

Matthew opens up the environmental debate around ruminant animals and climate change. Agriculture in Australia contributes to around 16% of greenhouse gas emissions.

Whilst ruminant animals are high producers of methane, a greenhouse gas that is around 30 times more potent than carbon dioxide, they are not the main contributors to global warming. Eating less red meat would obviously help.

Other environmental concerns that Matthew explores are also important—soil erosion, ceasing the clearing of land for agriculture, the appropriate use of fertilizers and appropriate water management. Matching crop and animal farming to land type are also explained.

So what do you choose if you eat food?

We all eat food!

Matthew offers a range of suggestions to minimise our impact on the environment and improve the lives of animals. He encourages us as the consumers to raise our voice about what we expect. This has already helped improve the lives of free-range and organic hens. Coles supermarket has also stipulated better housing conditions for sows in piggeries.

We are spending less, as a proportion of income, on food than ever before. At the moment, animals, farmers, and our environment are carrying this cost.

Matthew also proposes that we can pay more for our food to allow for the ethical raising of animals. We are spending less, as a proportion of income, on food than ever before. At the moment, animals, farmers, and our environment are carrying this cost.

“On Eating Meat” encourages you as a vegan, vegetarian, flexitarian, pescatarian or omnivore to understand your food environment, take an interest in where your food comes from and make ethical and environmentally sustainable choices as often as you can. Eating less meat is one of them.

I quite like the Michael Pollan quote, also shared by Matthew, “Eat food. Not too much. Mostly plants.”